Bring the elegance of Imperial Russia with the Lomonosov Porcelain Decorative Wall Plate Little Prince ? Fox 10.8"/275 mm.  Give your home a cheer with simple yet elegant statement of style. Made from white hard-paste porcelain, this unusual decorative wall plate was made at the imperial Russian porcelain factory in St. Petersburg. It will also be a perfect gift. It's also a perfect addition to any porcelain collection.

Quote: "Words are the source of misunderstandings." 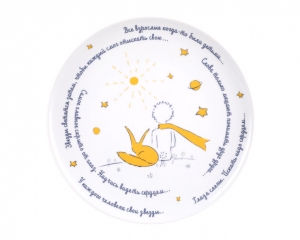