The Fox and the Crane

A fox and a crane became friends. The fox wanted to give her friend the crane a treat and invited him to dinner.
"Come and have dinner with me, Brother Crane, I'll give you an excellent meal!"
The crane accepted the invitation and the fox made some porridge and spread it on plates.
"Eat it all up, Brother Crane," said the fox, "it's very good, I made it myself."
The crane pecked and pecked at the plate with his long beak; he pecked and pecked but could not get anything off the plate.
Meanwhile the fox was licking her plate with her tongue; she licked and licked until the plate was quite clean. She ate up all the porridge herself.
"Don't be angry with me, Brother Crane, but that's all I have in the house. There's nothing else to eat."
"Thank you for that, Sister Fox," answered the crane. "Now you must come and have dinner with me one day."
The fox went to the crane for dinner. The crane had made some soup and put it in tall jars with narrow necks. He put the jars on the table and said:
"Eat it all up, Sister Fox. It's all I have in the house."
The fox walked round and round her jar. She tried this way and that, she licked it, she sniffed it, but not a drop of that soup could she get, for her head was too big to go into the neck of the jar.
But the crane had his long beak in the jar and pecked and pecked until he had eaten all the soup.
"Don't be angry with me, Sister Fox, but that's really all I have in the house."
But the fox was angry. She had thought she would eat enough to last her a week, but she went home hungry, as hungry as she had come. The crane had given her tit for tat.
Since then there has been no friendship between the fox and the crane. 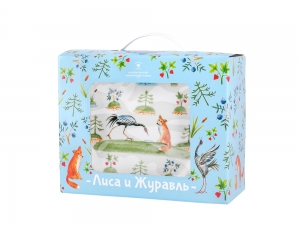